I’ve given to Toys for Tots, as you have, for several years.  Sometimes at a party, while at other times gifts were placed in a collection bin.

My wife and I often selected gifts in the past that mirrored the ages of our own kids, but as our son and daughter have gotten older we seem to revert back to gifts tailored for younger aged children, with a sense of nostalgia – and of course with some input from our son and daughter.

This year we did something different.

A few weeks ago, we read about an opportunity in the church bulletin to serve at one of the distribution centers – we were all over it!

Last Saturday 30 people from our church joined 100 more volunteers for a three hour shift at Toys for Tots warehouse.

It isn’t often that we can take part in a volunteer opportunity, where each member of the family can play a part – it is a day that I won’t soon forget.

While the process of sorting, packing and preparing toys for distribution has several parts to it, we spent our time packing toys in groups of ten into large bags and putting the bags into a staging area, segmented by age and gender. 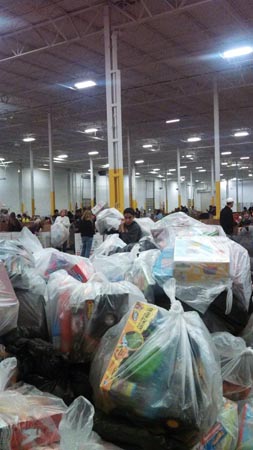 I stood back in amazement sometimes watching the forklifts bringing toys in and moving toys out, through each stage of the process – maybe I’m a little “nerdy” when it comes to watching, and understanding the production flow.

What stood out to me the most last Saturday was YOUR generosity.

The people of north Georgia must have felt the same sense of emotion we have in picking out the right toys, imagining what a child might appreciate best, and feeling a sense of joy in contributing in some small way.

Some toys had batteries already taped to the back, in the knowing way that only a parent that didn’t prepare ahead of time would have learned from experience.  My wife and I have been there too!

We saw the nerf spare bullets, purchased in anticipation of a need for replacements, once some of the bullets get too far behind the couch.  When my wife saw some spare bullets in one box, and a nerf gun in another box, she quickly made sure that both were packaged together.  We have been there too!

I saw volunteers making the careful decision as to whether a gift belonged in a certain aged group, or another.  There was truly a conscious effort to spread some of the gifts to the older age groups, when possible.

After seeing the distribution of toys, I will concentrate my efforts on ages 11+, going forward.

I know that during the time I was volunteering, my mind constantly raced ahead thinking about what types of toys I would want to include in each bag – of course a large box, along with some medium and smaller sized boxes.  And of course, toys that would make sense going together.

We saw a station for assembling bikes – you remembered your first bikes under the tree on Christmas morning!

The compassionate people of north Georgia stepped up in a big way with toys of all sizes, shapes and varieties!

I imagined the feelings of joy you had in selecting the gifts and making them available for children you more than likely never meet. 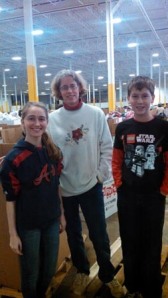 I thought about all of the hands that have touched the gifts along the way.  The contemplative hands of each person purchasing gifts, the diligent hands of those delivering your gifts to the service center, the discerning hands making sure that your gifts were placed into the proper age groups and into the bags, and the dedicated hands of those coming to pick up the toys – and later placing them under the tree.

I thought especially of the hands of small children opening the gifts on Christmas morning – many may not have expected to see gifts under a Christmas tree given some of the disappointments that may have been experienced on the ordinary days.

So many hands coming together to spread joy, during a time when we remember the birth of Jesus, whose light splits the darkness.

I was deeply humbled to have had the hands of my family somehow involved somewhere in the process.

We’ll make helping out at the Toys for Tots distribution center a part of our annual holiday tradition, going forward.

If you’ve ever thought about lending a hand at a Toys for Tots distribution center near you, I can tell you it will be an incredible opportunity that you won’t soon forget.

Merry Christmas to you and yours!