Others have often given the advice to stay away a couple of “touchy topics,” which are nearly guaranteed to draw controversy, and serve as a turnoff to those around us – politics, and religion.

Since my faith plays a role in who I am, and how I think, it is harder for me to stay away from the topic of religion. While I am far from perfect, I try to live according to my beliefs more than I try to speak about them.

It’s easy to see why religion can sometimes alienate, or cause friction, given some of the most recent debates in society – the vigilance of saying “Merry Christmas,” instead of “Happy Holidays,” the demand to have copies of the Ten Commandments on some state and federal properties, and the need to have more religious instruction and prayer in school.

As the father of two, I can tell you that prayer is indeed in our schools, as well as on our playgrounds.

Sometimes the discussions serve to do nothing more than push people away from learning more about Jesus, and His teachings – and sometimes the arguments have a way of running contrary to what Jesus might even have to say.

As we move deeper into Holy Week, there will naturally be more interest and curiosity about Jesus. 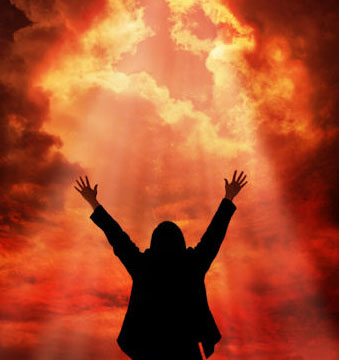 Easter Services will be packed with people from all across the community, with many seriously considering joining a church family. Some people will enter the doors of the church this Sunday, never to return again.

People will come into contact with us, not only in churches, but wherever we meet them, many will feel broken, unworthy, or looking for answers.

I grew up in a family that stopped attending church, once it became too difficult to bring three boys to services on Sunday morning. So on the flip side, I have been welcomed into a church family, after being away for so many years.

During Holy Week, many will also remember why they have pushed away from Christianity, with all of their might – having been made to feel judged, or forgotten, by the faithful.

I understand, as I have heard about and witnessed the actions of some of the faithful. I try to think of a church as a hospital, where all of the imperfect and broken, come together to learn about the teachings of Jesus, and to serve. Truly, I am among the ranks of the imperfect!

Many years ago, a young boy who was exposed to the church for a short time, was removed from it. The young boy continued to pray quietly, and look towards Jesus as an example of how to live life – though he remains far from perfect today. The boy grew into a man, tried various churches in places close to places where he worked, and was met with kindness from strangers.

Many years later the boy who had been away from church for so long, was given a book called the Prayer of Jabez, written by Bruce Wilkinson. The book was given to him by a friend, who was first a business colleague, before becoming a friend.

Since that time, he has silently lifted up the prayer, and watched miracles take place. He was not only able to witness miracles, but was fortunate enough to see them taking place at very close range.

I was that boy, and I am that man.

Jabez cried out to the God of Israel, “Oh, that you would bless me and enlarge my territory! Let your hand be with me, and keep me from harm so that I will be free from pain.” And God granted his request. (1 Chronicles 4:10)

May Christians truly use this Holy Week as an opportunity to speak with our actions – to welcome people into a church family, to witness where appropriate, and to give of ourselves in a way that is pleasing to Jesus.

More importantly, may we serves as tools in the coming days, to help bring clarity of faith to others – not so much through our words, but through our actions.

I am evidence that the actions of others make a difference to those who are seeking.